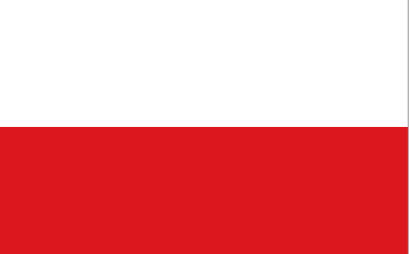 The reason that Philip (my brother) & I went to Poland was that one evening I  was reading the free local newspaper and saw an advertisement from a company called 'Land Travel',

.So on the 13 September 1991 Philip and I boarded the coach in Wakefield at 5am in the morning and sat, until we hit Dover, the crossing was uneventful. Then the journey really began drove through France in the afternoon and early evening, and drove all night through Germany always heading east.

We hit Berlin around 5.00 am  in the morning and then the coach driver got lost. Eventually the police escorted us out of the city and put us on the correct Autobahn. 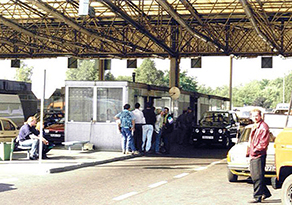 We got to the German/Polish border about 9.00 am  in the morning, and we waited, and waited until it was our turn to clear immigration, we eventually left the border at about 11.00am.


The drivers then headed south towards the town of Zakopane, which is near the city of Krakow. I remember that once we were about half a mile inside Poland you could see on the side of the road people selling Cigarettes, Beer etc from what looked like wheel barrows.
Every now and again you saw some one selling hot sausages. At about 12.00  the coach drivers pulled into a road side shop which sold beer and sausage and every one got off for a Polish sausage and a beer. Its the first time that I have had beer and garlic sausage for breakfast !

Once breakfast was over, we all boarded the coach and headed south all day. Back then the Polish roads left something to be desired, so glad that the coach had decent suspension.

We eventually arrived om Zakopane at about 8.pm, we had travelled 1300 miles in 36 hours, and travelled through five countries. We were dirty and very tired, so after a quick shower and a light dinner we went straight to bed. The following morning we opened the curtains saw trees and mountains. 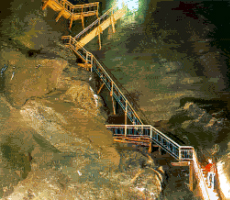 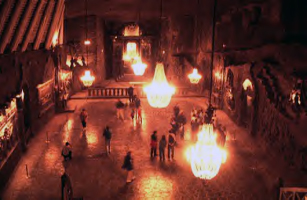 First was down the Wieliczka salt mine.....the only way down was to walk, and walk and walk.The mine has been in operation since the late 13th century. It has over 200 km of underground passages, connecting more than 2000  chambers on 9 underground levels extending down to 327m below the surface.

Over the centuries, miners have  carved many  sculptures out of the  rock salt. As a result, the mine has  underground churches, altars, and dozens of life size or larger statues. It also houses an underground museum and has a number of special purpose chambers such as a sanatorium for people suffering from respiratory problems. The largest of the chapels, the Chapel of the Blessed Kinga, is over a  100 meters below the surface, it is over 50 meters long, 15 meters wide, 12 meters high.The mine has been placed on UNESCO's World Heritage List  as having "outstanding universal value to mankind.".

We stayed about an hours drive from Auschwitz, it was a very sombre day. The picture of the wall, its estimated that 10,000 people died by firing squad.

Return to our travels page